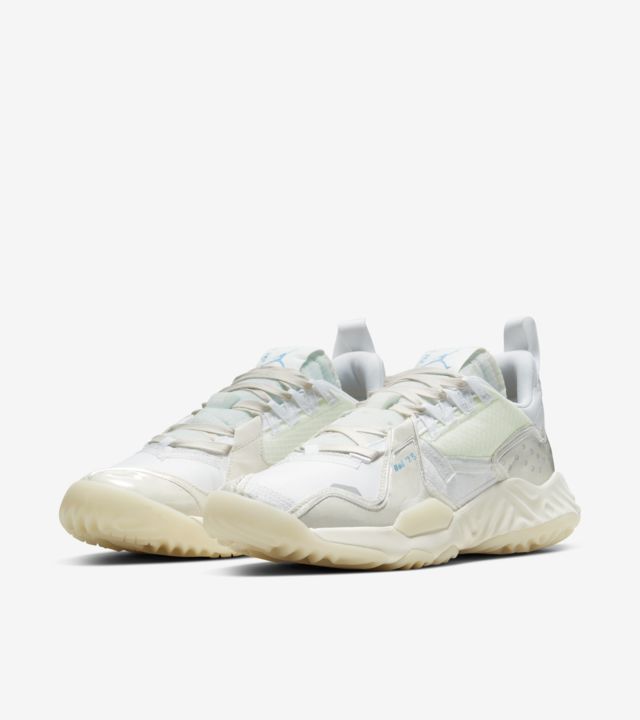 The Jordan Delta SP is Jordan brand’s latest lifestyle model that was released as part of their 23 ENGINEERED initiative. As the brand tries to find success outside of their main Air Jordan line, we have seen the creation of all kinds of brand new models, and the unfinished look of the Jordan Delta SP is by far one of the most unique. The Jordan Delta SP has dropped in 3 colorways thus far, and although some sizes are still available, they seem to have been very popular.

The Jordan Delta SP is a low top sneaker and features mesh,suede and ripstop on the upper. A Jordan wings logo can be found on the heel and there is a Jumpman logo on the tongue. As this is a lifestyle model, Jordan Brand have used the super comfortable react cushioning in the midsole.

The Jordan Delta SP rocks an unfinished look, with its loose stitching and different materials patched together, and this is something we haven’t really seen from Jordan brand, even though we have seen it from almost everyone else. The unfinished style was originally seen on Off-White and Nike’s collaboration dubbed “the ten,” with its creator Virgil Abloh stating that he liked errors, as it made the process more human. After the collaboration’s success, Nike amongst other brands attempted to re-create the same look that Virgil had made, with the hope that lightning would strike twice. Jordan Brand however, other than their own collaborations with OFF-White, have never previously experimented with the unfinished look, but on the Jordan Delta SP, you can clearly see the inspiration. The tongue does not appear to have been finished, with its foam insides poking out the top, and the materials on the upper appear as if they have been patched together, especially thanks to the exposed stitching particularly around the laces.

The Jordan Delta SP shares many similarities with the Jordan Proto-React, which was the brand new lifestyle sneaker from Jordan at this time last year. The Proto-React had more of a tech wear inspired look, but was a similar shape, and it was pretty well received. What many reviewers of the shoe were especially fond of was the React cushioning set up, which may be the reason why the Delta SP features the exact some sole. The Proto-React was one of the first times Jordan delved into a more tech wear inspired sneaker, and although the sneaker did not sell too poorly, they seem to have decided to go for a different look on the Jordan Delta SP.

The Jordan Delta SP has already been released in a black, a jade and a vachetta tan colorway, and they all seem to have been pretty successful. Although this is the first time Jordan Brand have gone for this imperfect, unfinished look on a sneaker, they have been experimenting with more wild and unique designs on their clothes, to much success, so the Delta SP selling out in most sizes should not come as a surprise. Retailing for $150, the Jordan Delta SP is available right now from Nike’s online store.