Home Air Max Everything you need to know about the Air Max 90 Orange Duck... 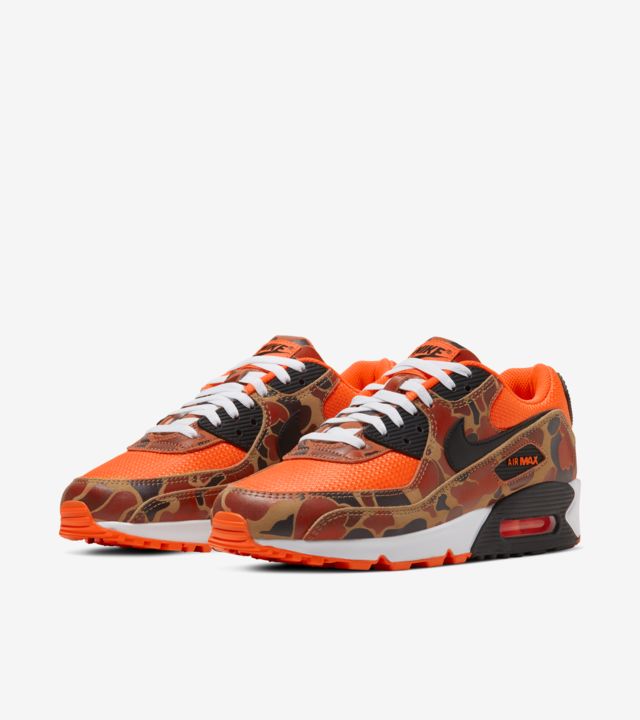 This year, the Air Max 90 is turning 30, and in celebration of such an impressive milestone, Nike have created 3 Air Max 90’s, that each feature duck camo on their upper’s. The first pair was covered in a bright red, as a call back to the Atmos Air Max 90 “Duck Hunter Camo” that released in 2013, and was shortly followed by the Air Max 90 Green Duck Camo back in may. Last but not least however, this June, we are expecting the release of the Air Max 90 Orange Duck Camo.

This Nike Air Max 90 comes in an orange mesh upper, with duck camo overlays on the mudguard and around the eyelets. It is also important to mention that the duck camo on this pair will use earthy tones, that will match the orange much better than standard duck camo would. The swoosh and TPU accents will be black, and the sole will consist of a white foam with an orange rubber outsole.

If the previous 2 duck camo releases are anything to go by, the Nike Air Max 90 Orange Duck Camo should sell out relatively quickly, and resell for just above their $130 retail price. This is thanks to the shoes similar appearance to the Atmos “Duck Hunter Camo,” although since the Duck Camo Infrared’s released on this years Air Max day, the hype surrounding the model’s seems to have dropped off slightly.

We have not yet been given a release date for the Air Max 90 Orange Duck Camo, except from Europe, where it is slated to drop on the 16th of July, so it is likely the rest of the world will be able to get their hands on a pair not too long after that.