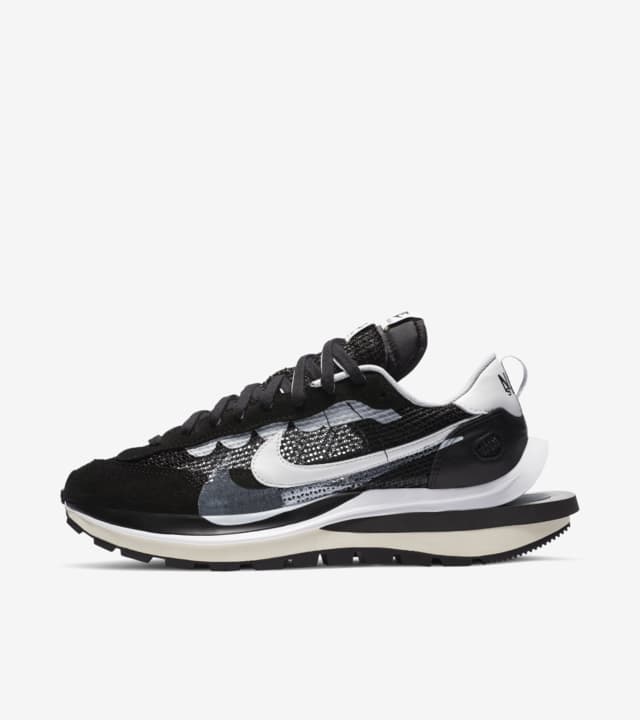 After the successful release of the Sacai x Nike Blazer, and LD Waffle, the two brands have decided to collaborate once again, on what we now know as the Sacai x Nike Vapor Waffle. Although official word is yet to come out, reputable member of the sneaker community, SolebyJC has given us a good look at the model, expected to release this Summer.

Like the previous Sacai x Nike collaborations, the Vapor Waffle comes with a very unique look, designed to be a mash up of the Nike Vaporfly and the Nike Waffle Racer. The upper features a suede and very thin FlyKnit upper, with a leather heel cup and back tab. Also, seen as the shoe is influenced by two separate Nike models, it features two Swooshes, two pairs of laces, and two Nike tags on the tongue. The midsole is what is turning most heads however, as it is consists of 3 separate sole’s stacked on top of each other.

In a similar fashion to the previous Nike x Sacai releases, the shoe has got some pretty heavy backlash, but there does still seem to be some sneakerheads who like the modern design. It it important to remember that the Sacai x Nike LD Waffle also featured multiple soles stacked on each other, and was still very popular, however in this case, there is a third sole that sticks upwards, which has got some people wandering whether the shoe could survive if the back of it was stepped on.

We are not yet sure of when the Sacai x Nike Vapor Waffle will release, but it is expected that it will not be long until we hear from Nike, so keep your eye out for more information coming soon.