Home Air Jordan A look at the Dior x Air Jordan 1, and the morality... 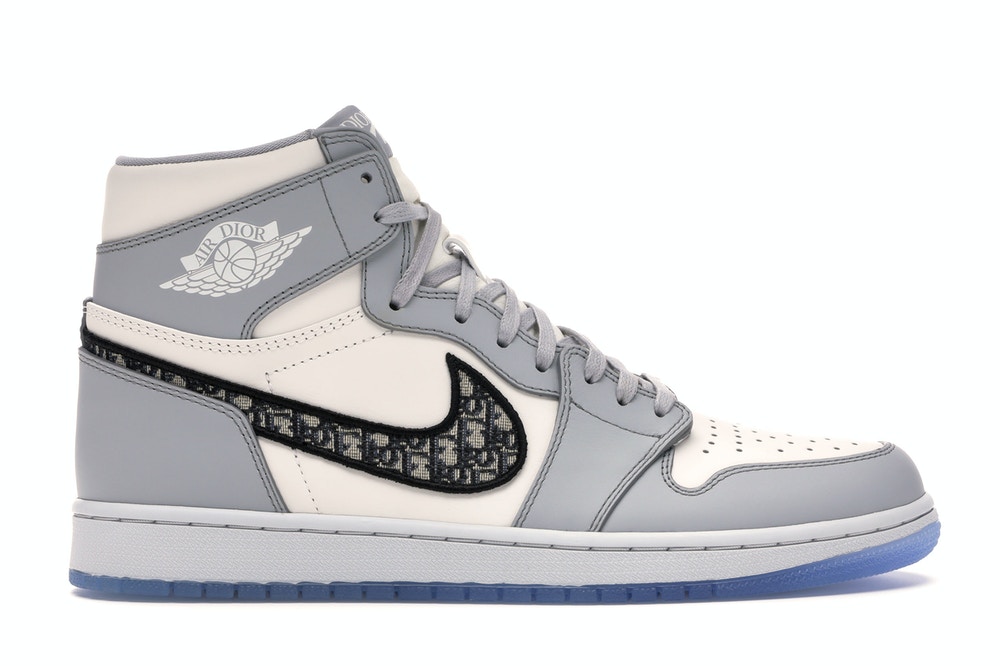 Late last year it was revealed that luxury designer brand Dior would be collaborating with Jordan Brand on their iconic Air Jordan 1. This was met with excitement, followed by despair once the public realized that the Dior collaboration would retail for a ridiculous $2000, and only 8,500 pairs had been made. Originally scheduled to release in April, the shoe was held back due to the pandemic, however a few pairs that have gotten out to the public are already fetching prices of over $15,000.

The Dior x Air Jordan 1 comes in a grey and white colorway, with an icy blue outsole. Dior’s iconic pattern can be found on the swoosh, and an edited version of the Jordan wings logo which features the words “Air Dior,” can be found on the sole and ankle of the shoe. The main difference with this pair, as apposed to a standard Air Jordan 1, is the leather, which is listed as fine calf-leather and will be a much higher quality than what you would normally find on a sneaker.

The Dior x Air Jordan 1 was announced to mixed receptions, as although many were excited for such a collaboration, others thought it was ridiculous to price a sneaker so highly. It is undeniable though that whenever it releases, it will be sure to sell out, and it is one of the most anticipated sneakers right now. Resellers are especially excited, as although it will set them back $2000, if they are able to get a pair, they could sell it on for possible tens of thousands of dollars. Many fans are also happy to see Jordan collaborate with a designer brand like Dior that is so well respected. Sneakers often ignore quality to focus on the design or the meaning, and some sneakerheads may enjoy an Air Jordan 1 focuses on the materials for once.

Many sneaker heads are extremely angry about the expected release of the Dior x Air Jordan 1 though, as they think by increasing the price point and reducing the quantity, Jordan and Dior have created a fake hype around the shoe, that is really centered around the monetary value, rather than the sneaker itself. Also, a standard Dior sneaker doesn’t retail for any more than $900, so when the price point is set at $2000, it comes across as if around $1100 has been added on to the retail price, simply because its going to be an Air Jordan 1. This is infuriating for a lot of people, as previous collaborators such as Travis Scott and Virgil Abloh made Air Jordan’s that were expected to sell for thousands, and yet they still set the retail price at less than a tenth of what Dior are charging. No other collaborator, no matter how popular, has gotten away with increasing the retail price of the Air Jordan 1, so many believe the same rules should apply to Dior.

When a shoe retails for $2000, the shock factor alone will give it enough attention for it to sell out, however sneaker heads are split on whether or not this is a problem. We have no word yet on the sneakers release, but it is still touted for a release before the end of the year.